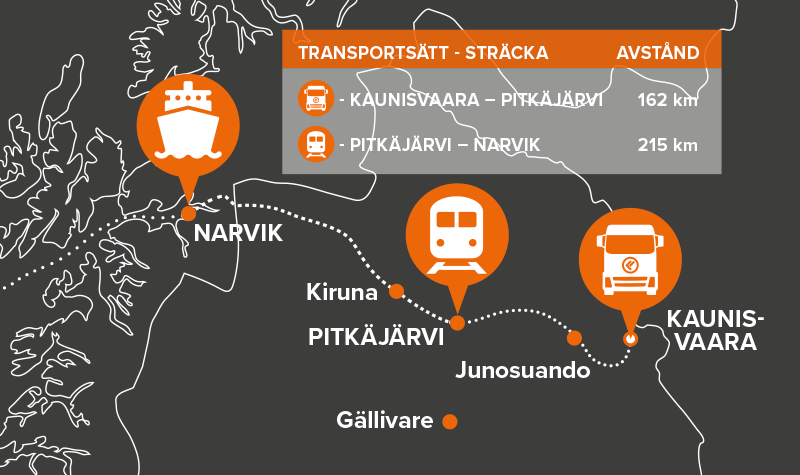 By truck, train and ship

Transport of our iron ore concentrate from Kaunisvaara out to our customers is by lorry, train and ship.

From the concentration plant in Kaunisvaara, the ore is transported by lorry to Svappavaara on roads 395, 99 and the E10 heading northwest. Every day about 88-90 loads of ore are driven, divided among 25-30 lorries. Each lorry can take a load of 62 t of iron ore.

The vehicles are closely monitored by our traffic control centre in Junosuando where round-the-clock they can see the speed, fuel consumption and location of each vehicle.

All our lorries have an alcolock and a speed limiter set at 80 km/h.

I Pitkäjärvi, Svappavaara lies our reloading station, where the iron ore concentrate is reloaded for further transport on the Ore Line to Narvik harbour. In Narvik the ore is then shipped out across the sea to our customers.

To improve road safety and drivability on the stretch Kaunisvaara–Svappavaara, the Swedish Transport Administration is currently implementing a number of measures in the so-called MaKS project. It means among other things that roads are being widened and that crossings are being made safer.

Here you can read about how far the project has come and when it is due for completion.